The bestselling epic first book in the science fiction saga ‘Battle Earth’ is back, and better than ever. Re-mastered and with over five thousand words of additional material. Battle Earth tells of humanity’s desperate struggle to survive against an overwhelming alien invasion.

A distress transmission from Mars research colony warns of an advanced and unknown enemy approaching the heavily populated lunar colony. An elite marine unit commanded by Major Mitch Taylor is dispatched to protect the beleaguered civilians. However, the attack is merely a prelude to a massive invasion of Earth.

When the vast enemy mothership smashes through Earth’s atmosphere and deploys in the Atlantic, the armed forces of Earth soon realise they are fighting for the very survival of the human race. As cities fall throughout the world, American and European forces rally together to make a stand as they battle an enemy unlike any they’ve ever encountered. 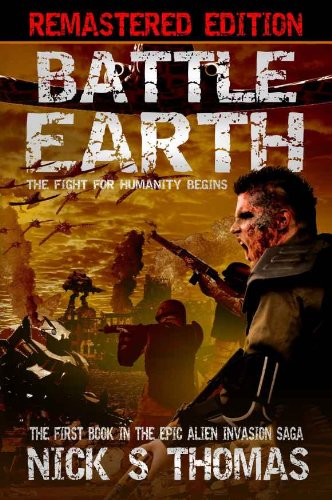