‘Intergalactic Terrorist’ follows Charlie Pinwright, possibly the most forgettable man on Earth, who, in the space of a few days, loses his job, has his flat rented out to a family of butchers and finds his girlfriend cheating on him with a Spanish cake decorator. Oh, and he is kidnapped by a crazy alien bounty hunter and sent into a new dimension full of strange worlds and even stranger characters, all who want to see poor Charlie dead!

Desperately trying to return home, Charlie finds himself a wanted man and is hunted by all the major powers of this new dimension, quickly becoming one of the most memorable men in the universe!
However there is much more at stake than his own life and he soon discovers that the fate of the entire galaxy may rest on his shoulders…

‘Intergalactic Terrorist’ is a comedic sci-fi/fantasy that is filled with brilliant characters and strange and exciting story twists! 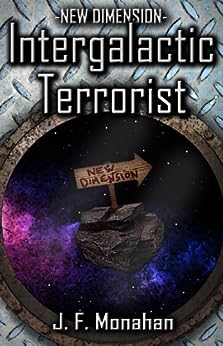