OLIVER
Valerie Cole is a pediatrician looking forward to her summer break. She dreams of beaches and martinis, of good books and sunbathing. Instead, she finds herself coaxed by her charming brother into a working vacation, two weeks in a remote Mexican city where his nonprofit has just opened a free clinic. Something goes wrong almost immediately, and Valerie finds herself locked in a dingy trailer in the middle of nowhere with a dangerously handsome stranger.

AKKER
Eva is a famous model turned actress in town to do a series of photoshoots and local appearances. A stalker has her frightened, and she hires Caballo to protect her. Akker is assigned her case, and he finds himself drawn to her, but is torn by his loyalty to his brother. Will he have to choose between romance and loyalty to his brother for the second time in his life? Will he make the right choice this time?

BROCK
A jewelry designer is headed to Fashion Week in Paris, but she’s received an unusual threat that leaves her concerned for her life. This woman is part of a pot of trouble brewing for Ox and he needs someone he can trust on it, and Brock is the only one available.

PRESCOTT
Ox Winn’s personal assistant, Skylar George, is married to one of his best operatives, Prescott Armstrong. However, no one knows it’s a green card marriage, due to end as soon as the INS closes their file on Prescott’s immigrant status. Skylar has done this without asking for anything in return, but when her great-grandmother begins acting odd, Skylar calls in a favor, asking Prescott to go home with her.

MAX
Tomboy James Duncan is a decorated war hero with a reputation. No one in San Antonio would touch her with a ten foot pole until Ox Winn hired her. Now, four years later, she’ll do anything for him, even put on a dress. Teamed up with Max Lucas, the one operative at Caballo she hates the most, James is tasked with infiltrating a human trafficking ring running raves in abandoned buildings all over the city.

OXLEY
Ox Winn took over his father’s security firm, Caballo, four years ago. Taking the reins meant carrying on the legacy his father left him. But when Ox discovers that legacy isn’t quite as honorable as he’d always assumed, he takes steps to protect the ones he loves even though it could mean sacrificing something more precious than his father’s memory: his life.

Detective Kinsley Salazar is a woman haunted by a dark past who has only recently opened a teeny corner of her heart to Ox. When an arrest warrant crosses her desk with his name on it, Kinsley is determined to do her duty no matter how hard it might be.

But when it becomes clear that by doing so she could be putting Ox in harm’s way, she makes a choice that will alter the course of both their lives. Will Kinsley be able to save both herself and Ox? Or has she doomed them both to disaster? 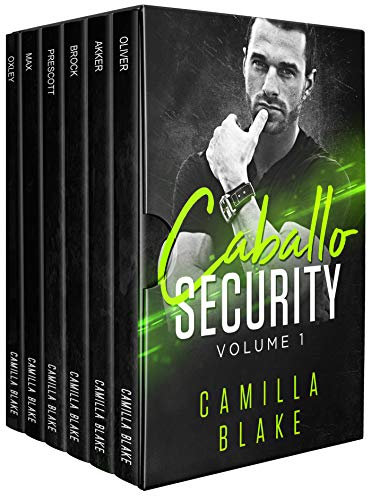